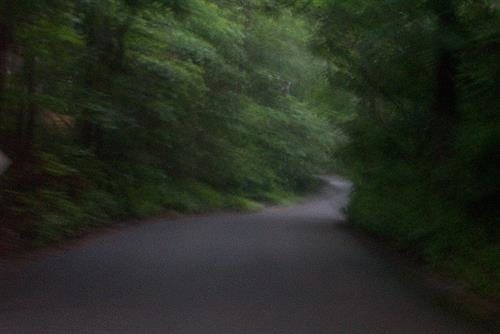 Several ghost legends exist on this road. It sits next to Mount Misery and is reportedly a site of several tragic events, including the school bus full of kids that skidded off the bridge above Sweet Hollow Road on a snowy day and killed everyone on board; the three boys who died hanging themselves from the overpass; the children who were abused and killed while attending a day camp along the road in the 1930s; the police officer who was shot and killed on this road; and the story of a woman named Mary who got into a fight with her boyfiend, was either pushed out of the car or jumped out, and then hit by oncoming traffic and killed.

The tragic events have left spirits behind to haunt the area. Some say if you stop the car under the bridge and leave it on neutral that your car will be pushed foward (it is believed that it is the children's spirits who died from the tragic school bus accident who are pushing). Then there's the story of looking up at the overpass while driving underneath it to see the bodies of the three boys who hanged themselves.

For the tragic day camp children who were abused and killed, some have reportedly seen spirits of children dressed in 1930s clothing. And in relation to Mary who died after arguing with her boyfriend, some say her ghostly image may appear walking along the side of the road or show up while driving down the road for a near-miss hit and then disappear.