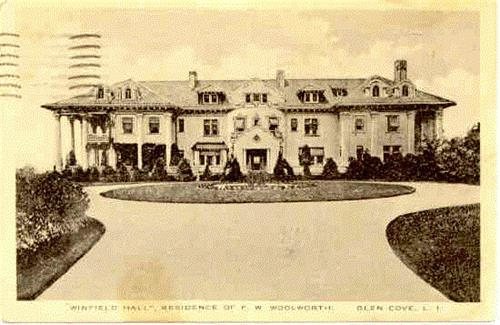 The historic Woolworth Estate dates back to 1916 and consists of the main residence, known as Winfield Hall, a garage with living quarters, a main entrance, two greenhouses and various landscape features including a tea house.

The estate was destroyed in a fire in its early years, and Frank Winfield Woolworth decided to work on building Winfield Hall. The house ended up costing a whopping $9 Million - its grand staircase costing $2 Million alone.

Woolworth's daughter, Edna, committed suicide at The Plaza Hotel in New York City, while her father was at the estate hosting a party. A strange incident occurred at the party, a marble Family Crest was located above Winfield Hall's main entrance fireplace. It featured three faces of Woolworth's daughters, and it acquired a crack through Edna's face, leaving just the other two faces untouched. Stories say a lightning bolt was the cause of the crack.

Eerie sounds have been reported in Winfield Hall, along with a spirit that has been spotted floating around the halls. The sounds of a woman crying have also been heard here and in the gardens, a young ghostly woman is known to appear.