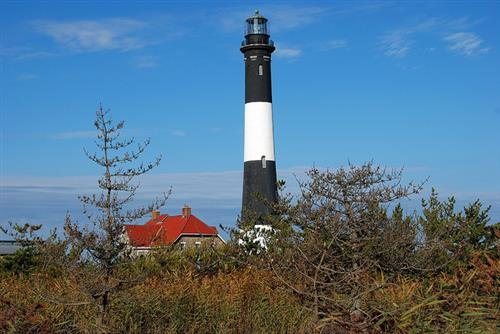 The Fire Island Lighthouse is a Long Island landmark that is well known among locals and can be spotted from a distance while driving down Ocean Parkway and while crossing over the Robert Moses bridges, heading to the beaches.

The lighthouse is historical, and it's also believed to be quite haunted. Stories say it is haunted by the caretaker of the lighthouse who oversaw the demolition of the original lighthouse and building of the one that stands in place today.

While the lighthouse was being rebuilt, the caretaker was left to stay at a nearby shack that lacked insulation. His daughter had ended up falling ill during the winter in the mid-19th century and died as the summoned doctor did not arrive in time. A funeral was held for her and her body was buried in Sayville, but only the caretaker's wife was present for the events. The caretaker could not be there for any of it because the house needed to remain lit for ships.

When the lights went out one night at the house, the caretaker was discovered dead hanging from a rope. To this day, haunting events have occurred including some who have witnessed a faint visual of the caretaker at the lighthouse, or of him holding a rope in his hands, sounds of walking and doors opening and closing for unexplainable reasons, and even sounds of delirious laughter.