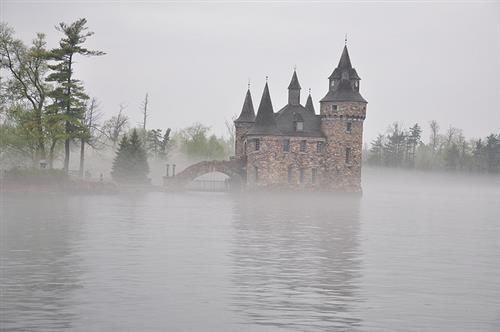 A large castle built on a scenic island, Boldt Castle is today a popular destination for visitors and wedding receptions. The century-old castle’s origin is, however, one of tragedy. Construction on the 120-room, six story castle began in 1900 when Charles Boldt wanted to establish a grandiose home for his family. He hoped that the castle would be finished in time to be given to his wife, Louise, as a Valentine’s Day gift in 1905.

Sadly, that gift would never be given, as Louise died in January of 1904. Heartbroken, Charles called the workers, telling them to cease construction, and never visited the island again. The unfinished building was neglected for 73 years until the Thousand Islands Bridge Authority acquired and restored the building.

Now that the castle is finished and open to the public, many visitors have reported strange occurrences within its walls. People have heard disembodied footsteps throughout the corridors and seen an eerie light in the upper windows. It is believed these paranormal happenings are being caused by the spirits of Charles and Louise Boldt.