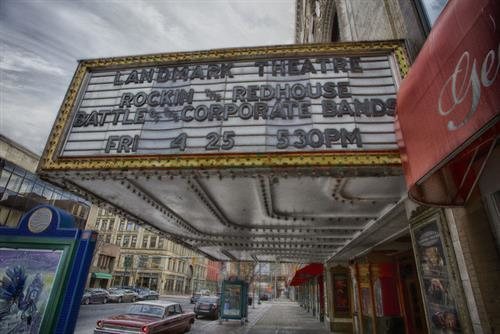 Opened in February, 1928, the Landmark Theatre was originally an opulent cinema built by the Loew’s Corporation under the name Loew’s State Theater. Attendance plummeted in the 1970s, however, and the building was in danger of being demolished until a local historical preservation society formed to purchase the building and convert it into a performing arts center. Residents were happy to see the new Landmark Theatre open, though evidently not all of the theater’s guests are still among the living.

Three ghosts are believe to haunt the building, and are particularly active in the back of the auditorium, the Red Room, the Walnut Room, and the basement which is sometimes called the catacombs. One of the spirits is that of an actress named Clarissa who fell from the balcony to her death. A stagehand named Oscar, who was electrocuted to death in the building, has been seen, as has a janitor named Charlie who died of natural causes while in the building.

Clarissa’s ghost has appeared before many people, and she has also been known to manifest in the form of a phantom lilac scent. Oscar’s ghost has been known to adjust the soundboard backstage, and Charlie has been seen cleaning the theater. In addition to these apparitions, visitors have reported seeing a strange blue light, hearing voices, and having eerie images appear in photos.