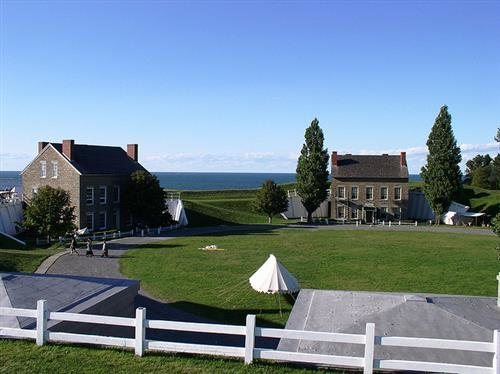 Fort Ontario was first constructed near Oswego River and Lake Ontario in 1755 by British forces, but it was quickly razed and destroyed by French soldiers in 1756. The British rebuilt it three years later, only for American troops to put it to the torch in 1778. Four years later it was again occupied and rebuilt once more by the British.

Several ghosts are said to now haunt the fort, including a British lieutenant named Basil Dunbar who lost a duel on the site in 1759. Dunbar’s ghost has been seen in a dazed state, appearing as though he does not realize he lost the duel and died. A soldier in Civil War dress has been seen here, sometimes with a female spirit, and visitors have reported hearing a little boy giggling or crying. Another Civil War soldier has been seen roaming without his head on the railroad tracks between the fort and the lake. Corporal Fykes, who died of disease at the fort, will appear on occasion accompanied by a sudden drop in temperature.

A grave belonging to George Fikes in the fort’s Post Cemetery has also been the subject of legend. Locals say anyone who steps on the plot will be haunted for the rest of his or her life, but anyone who jumps over it can choose to have someone else haunted. Evidently this legend is widely believed, evidenced by the enduring appearance of two bare spots in the grass on either side of the grave.